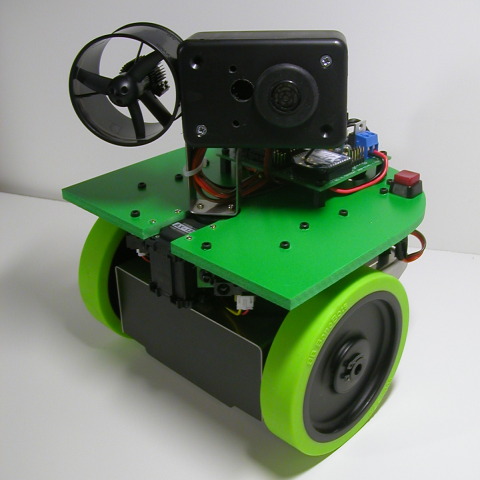 I've nearly finished the mechanical & electrical assembly of GMR. I have to redo the front plate of the head as the mounting holes aren't quite correct for the TPA-81. I also have to rig up the UVTron in the back.

So far the navigation software is pretty solid, since its a small revision of the code that won the CNRG in the fall. The room entry code needs some work, as well as the fire fighting itself -- mainly to address the move from a pyroelectric to a TPA-81. I also plan to rework the cornering code, so that the robot makes a smooth turn through the corners, rather than stopping and turning 90 degrees. This was where LGM lost the most time, his run at CNRG would have been good for about a 64 second final score at Trinity. That time would have beat the 2009 senior division winner, but would have been about 3x slower than the winner of the HS division. I'm hoping that with these improvements I can cut the final score to about 20 seconds...