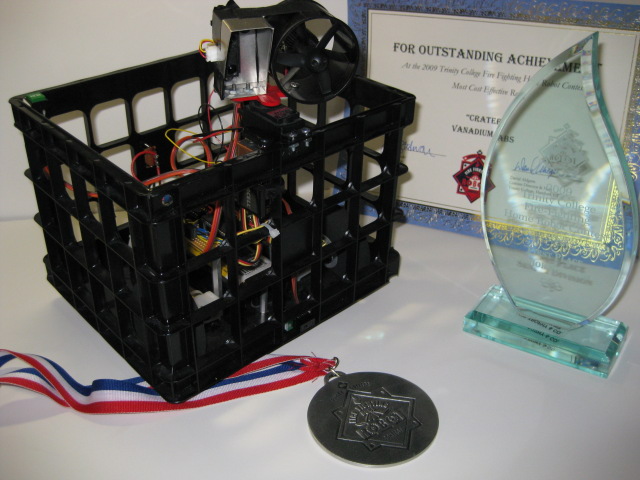 Trinity 2009: What a whirlwind... It was not the weekend I had expected.

The Green Machine Reloaded won the poster contest. I finished first in the Olympiad. But then the wheels fell off the whole operation... GMR didn't complete a single of his competition runs on Sunday. I was disappointed to say the least.

While I'd spent countless hours working on GMR, on the side I had built Crater, what was supposed to be a contender for the low-cost prize. I didn't expect much from a robot built out of $118 in parts, built out of a small crate, using a single distance sensor. He was slow. Really slow. Like almost slow enough that the judges would fall asleep. But he ended up being reliable. Really reliable. He finished all 3 of his runs. He hit the candle each time, which make his scores appear to be even slower (who knew such a thing was possible).

The senior division was split between 2 arenas for competition day. Crater's score was 3rd on the leader board, then 5th. It then became apparent that our arena was running quite a bit faster than the other arena, even though all three of Crater's runs were over, some bots in the other arena had only made 1 run.

As the afternoon continued on, bots in the other arena failed their runs. Suddenly Crater, was back to third on the leader board. But wait! That includes both robots in the Unique and Kit division.. a quick look at the entry list. #1 and 2 on the leader board are KITS! Crater, the cheap, slow, really slow, painfully slow robot had won the Senior Division. He outperformed robots that probably cost 10x as much. He outperformed robots that probably got 10x as much attention from their creators. As would be expected, Crater also won the cost-effective prize. His 189 second final time for three runs probably couldn't have won any other year in the past decade, but this year it worked just fine.

I should have noticed something going on Saturday. The "crate on wheels" was hugely popular.. the little green guy got almost no attention (his custom controller board, and wireless debugging turned some heads, but he got no love...). There's just something people like about animating everyday objects. His moving head, required by his lack of sensory, was also popular.