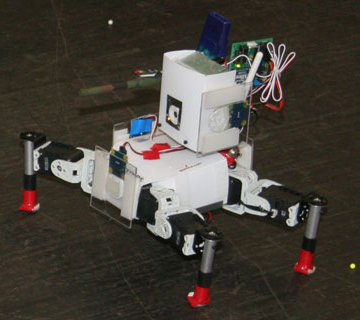 Robogames 2009 is now over. Both of my bots faired quite well.

IssyDunnYet, my entry into the inaugural Mech Warfare event, won the gold medal. We didn't ever get in a real ladder competition, too many bots had major issues, but Issy really did quite well in all of his matches. I've posted a tutorial on how Issy was built, over at the Trossen Robotics Community.

GMR made another appearance, taking second in the Fire Fighting Competition. I'm not too disappointed about that second, he lost to a team from an Indonesian University. They were greeted at home by the Minister of Education apparently. GMR was using a reworked version of Crater's code, including head panning and all sorts of other audience pleasers...