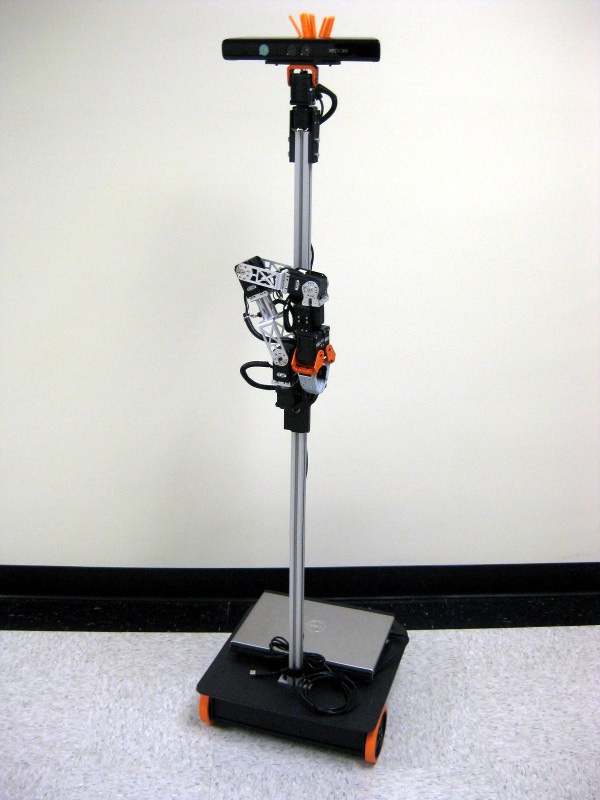 I've been working hard to finish up (at least from a mechanical and electrical standpoint) my latest robot for a demo day tomorrow. I thought I would post a few details here.

Maxwell is my latest attempt at a lowcost, human-scale mobile manipulator using an ArbotiX and ROS. The design guidelines were pretty straight forward: it needed an arm that could manipulate things on a table top, a Kinect for primary sensor on the head, and a mobile base that kept all that stuff upright. Additionally, I wanted the robot to be easy to transport and/or ship.

Maxwell sports a larger 16x16" version Armadillo base with motors that should support a 20lb payload at speeds up to 0.5m/s. Not shown in these images is a Hokuyo URG-04LX-UG01 which will be mounted on the base, just in front of the column. The head has two AX-12 servos for pan and tilt. Eventually, the head will include a shotgun microphone. 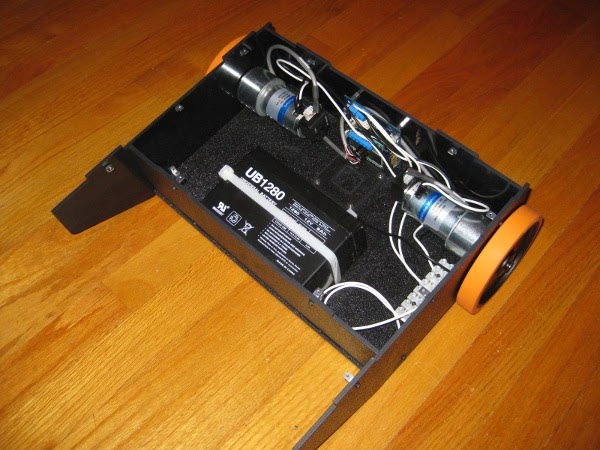 Maxwell's arm is constructed from 2 EX-106 (shoulder lift and elbow flex), 2RX-64 (shoulder pan and wrist flex), and and 3 AX-12s (one for wrist roll, and two to form a gripper). In all honesty, it only needs the one EX-106 in the shoulder, but I didn't have any brackets that fit the RX-64 at the moment. The actual gripper fingers are temporary, I have much better ones in the works. 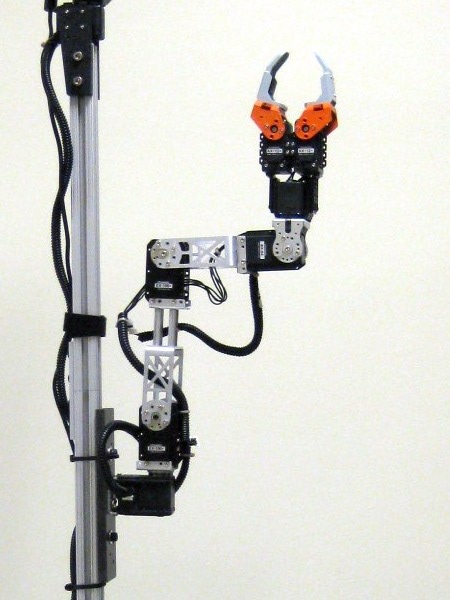 His central column consists of 3 sections of 8020 aluminum support, allowing all pieces to break into lengths under 20" long. This allows Maxwell to be disassembled and put into a reasonable size Pelican case for shipping. It only takes about 5 minutes to break down or setup Maxwell, as you only have to loosen 6 screws. Eventually, I'll have nicely cut foam, but for now I've hastily packed Maxwell for his journey to the state capital tomorrow: 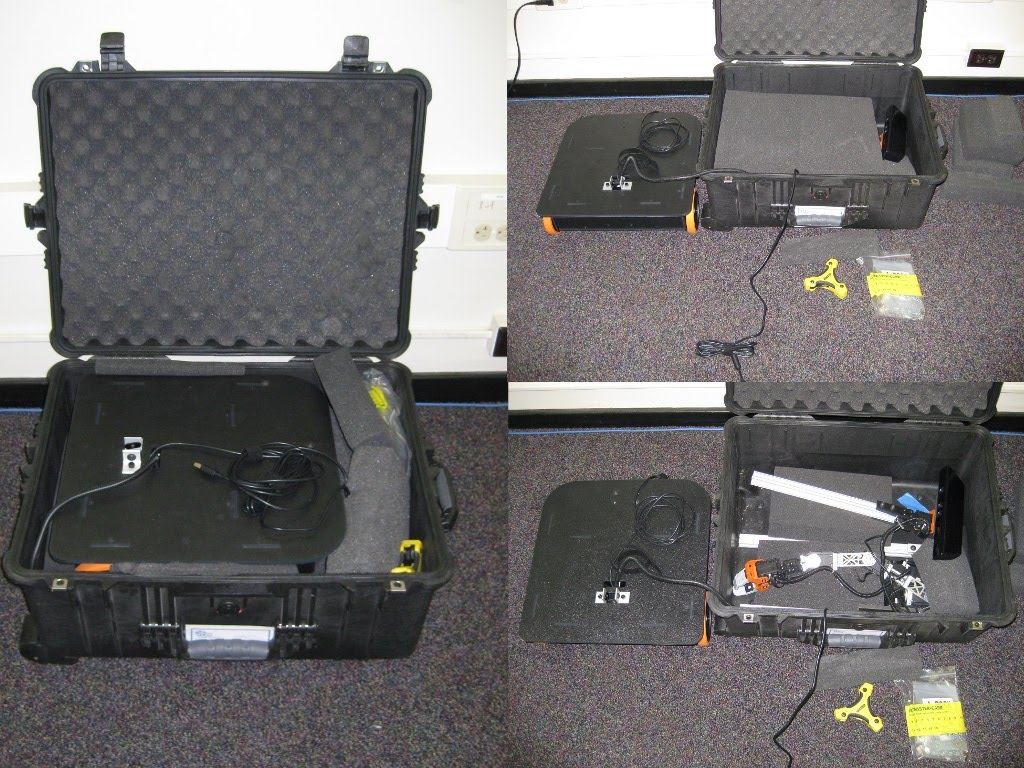 On the software side, Maxwell has been a driving force behind the development of the ArbotiX stack v0.4.0 release. I'll be posting video shortly of smooth arm interpolation being done by the ArbotiX and ROS wrappers (I'm still fighting a bit with IK issues), in the meantime, here is a view of Maxwell's URDF-based robot model in RViz: 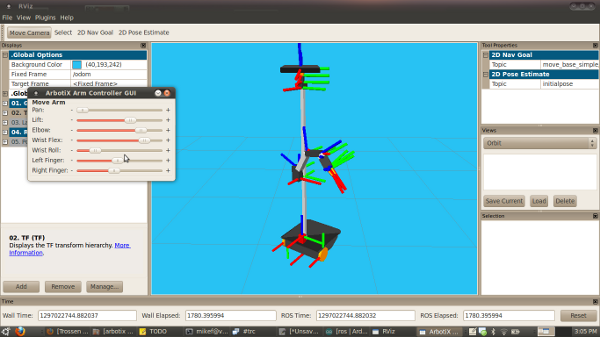 All of the configuration and launch files are now working, however I need to work on a calibration routine for the Kinect positioning, there is a bit of error somewhere in the head that causes the point cloud not to be aligned with the URDF model of the base when visualized in RViz (I unfortunately did not grab a screen capture of it, that will have to be a later post).

So what will Maxwell be up to? His first task is going to hopefully be competing in the AAAI Small Scale Manipulation Challenge. Once arm IK is functioning, and the kinect-&gtarm transformation has been corrected, we'll be working on recognizing and moving chess pieces. After the AAAI event, he'll probably get an upgrade for a vertical lift on the arm (similar to the one on Georgia Tech's EL-E) and possibly a conversion to two more anthropomorphic arms. Speaking of EL-E, I couldn't help but replicate that classic pose: 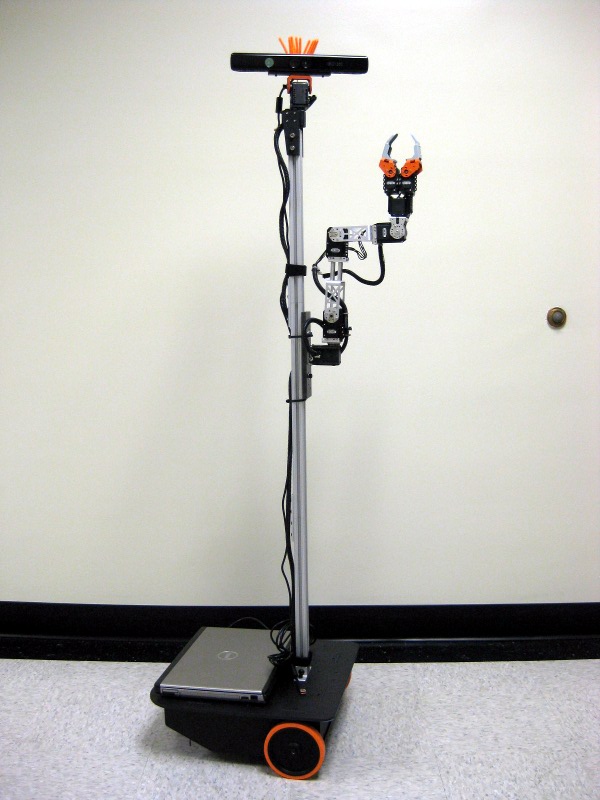 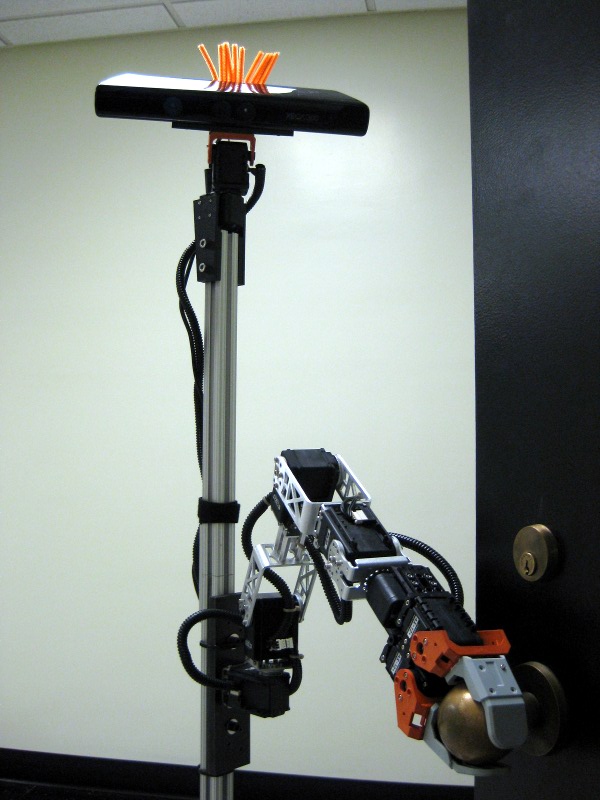