Blast from the Past: PR-MINI

30 Apr 2013       I was recently updating my personal website when I realized that I had some projects that had never seen the light of day. This post is about one of these old projects that I never showed off: 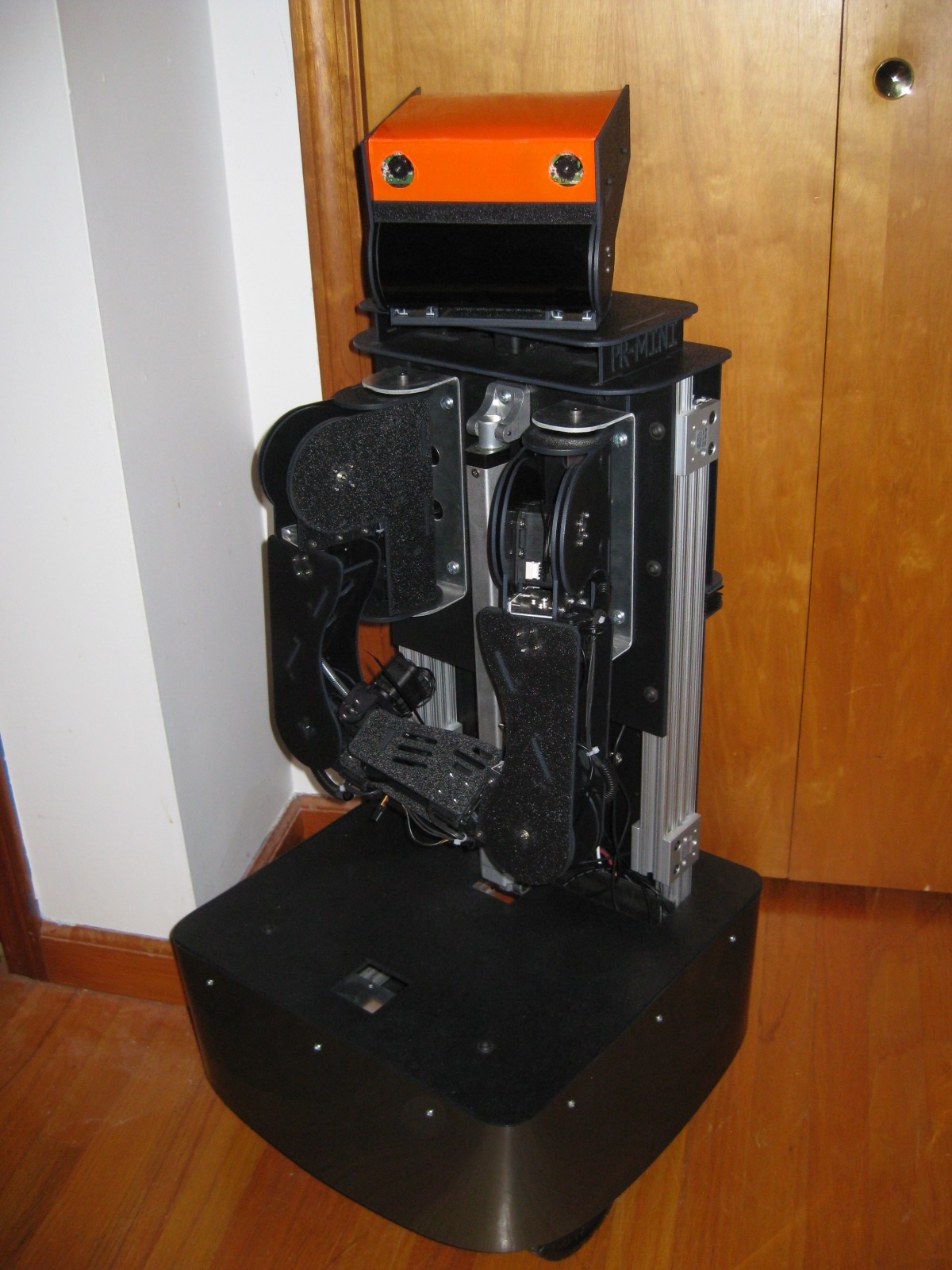 Back in late summer of 2010 I started to build a miniature PR2. It was a 60% scale model of the PR2 arms, base, and torso. The base was differential drive instead of the more expensive casters found in the PR2. I reused the motors and 6" wheels that had previously been used in REX, one of my first large robots. For this robot, the frame was primarily 8020 Aluminum rail covered/connected with laser-cut ABS and the occasional sheet metal bracket: 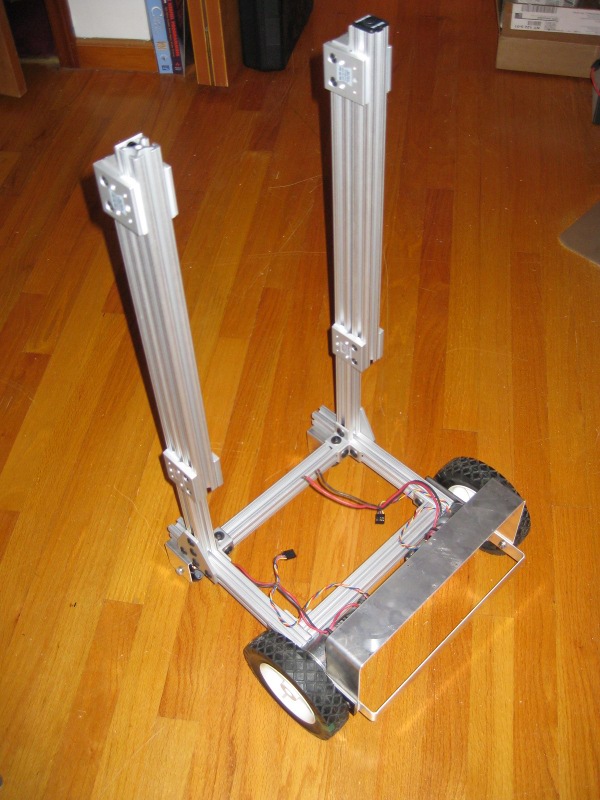 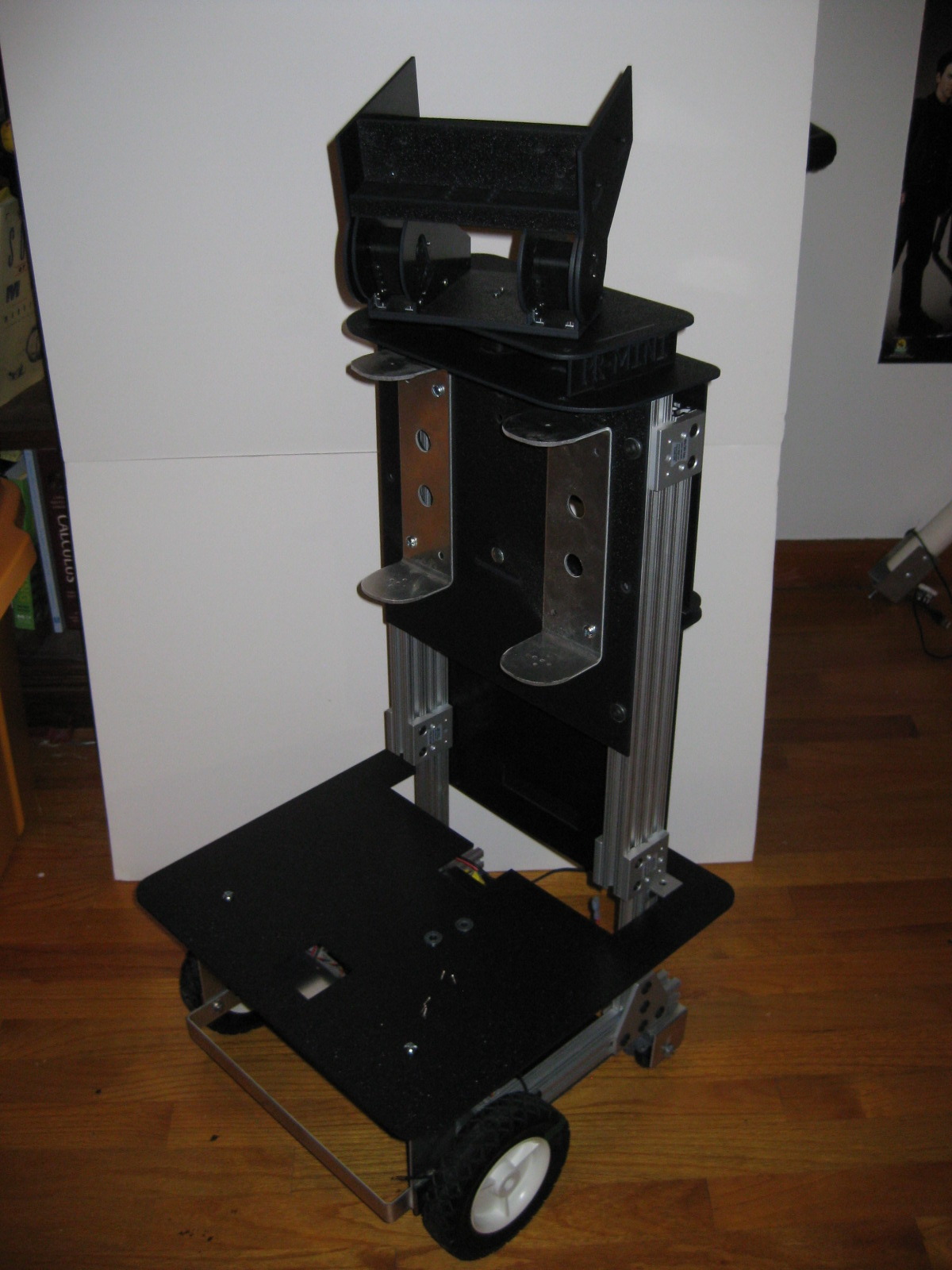 The head sported a pan/tilt, which used two AX-12s for tilting and a third for pan. It had two webcams for stereo, and was designed with enough space between the web cams to install a Videre short-range stereo camera, although I never got around to that:
The arms were pretty massive, nearly 0.6 meters long, with 7 servos. The shoulder pan, forearm roll, wrist pitch and wrist roll joints were AX-12s. The shoulder lift joint was an RX-64, while the elbow and upper arm roll joints were powered by (admittedly, under-powered) RX-24F servos: 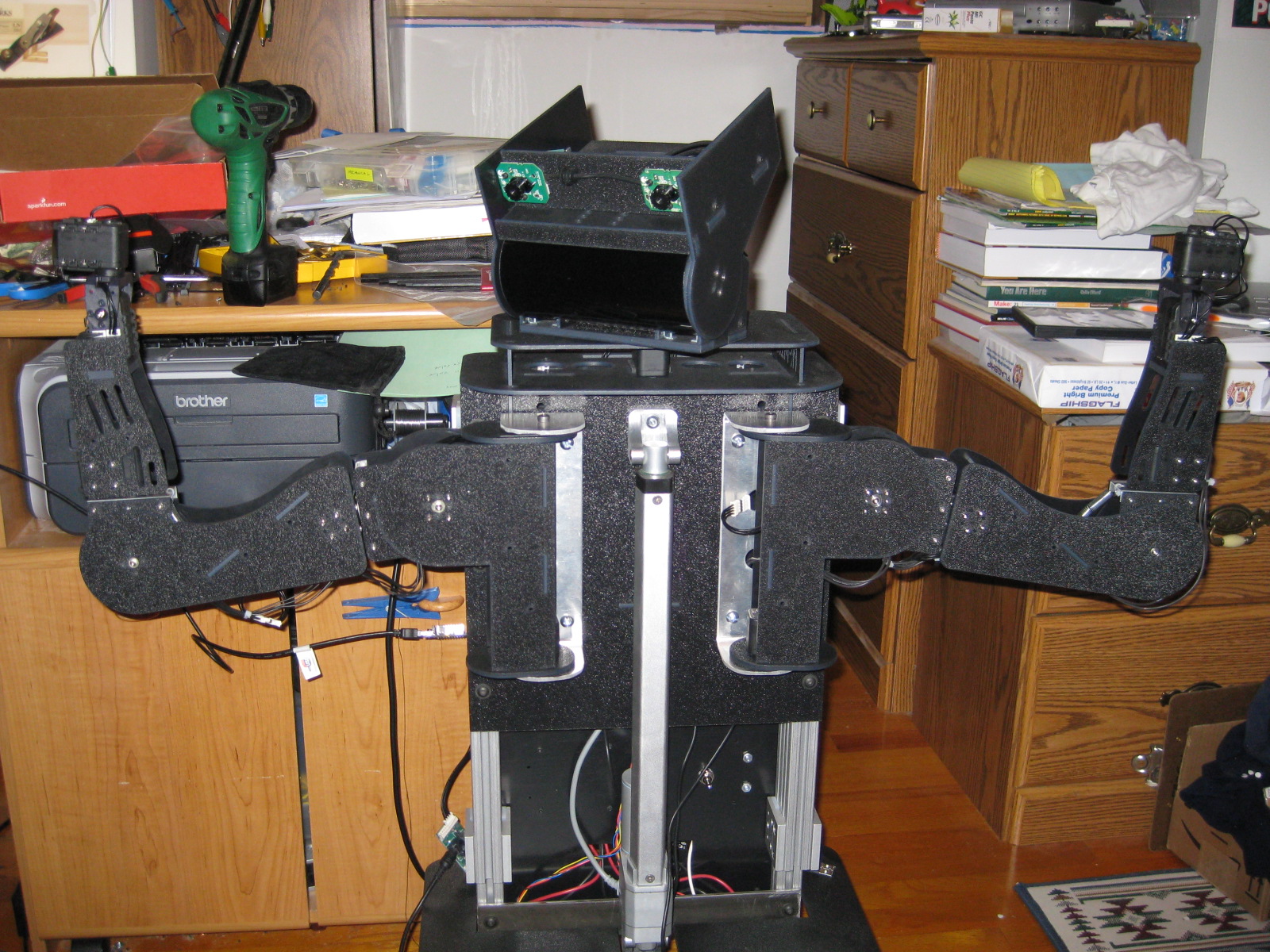 The torso had a 12" throw linear actuator, and used expensive and heavy 8020 parts to form the bearings and rail:

The entire thing was controlled by a laptop, tucked into the base, and an ArbotiX prototype with integrated motor drivers. When dealing with robots this big and heavy, an E-stop is a must. The wiring on the back panel was made somewhat tidy, and covered with Lexan shells: 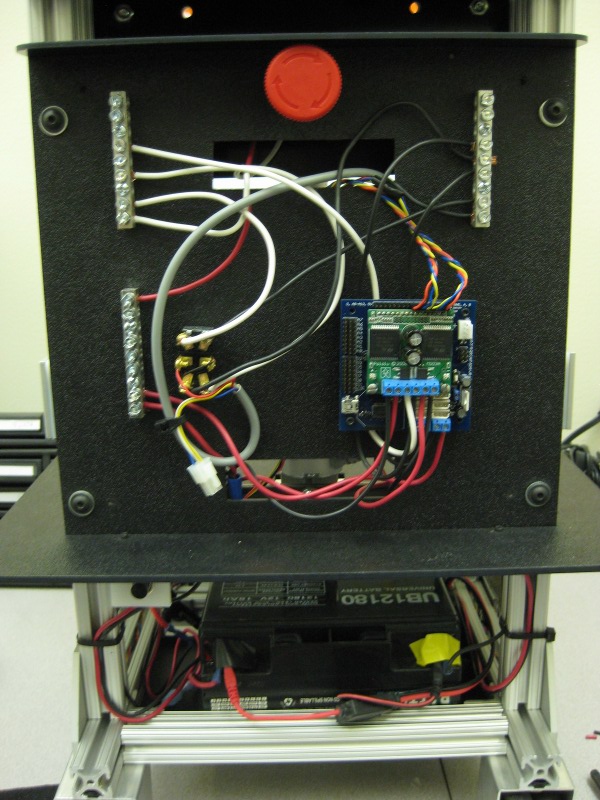 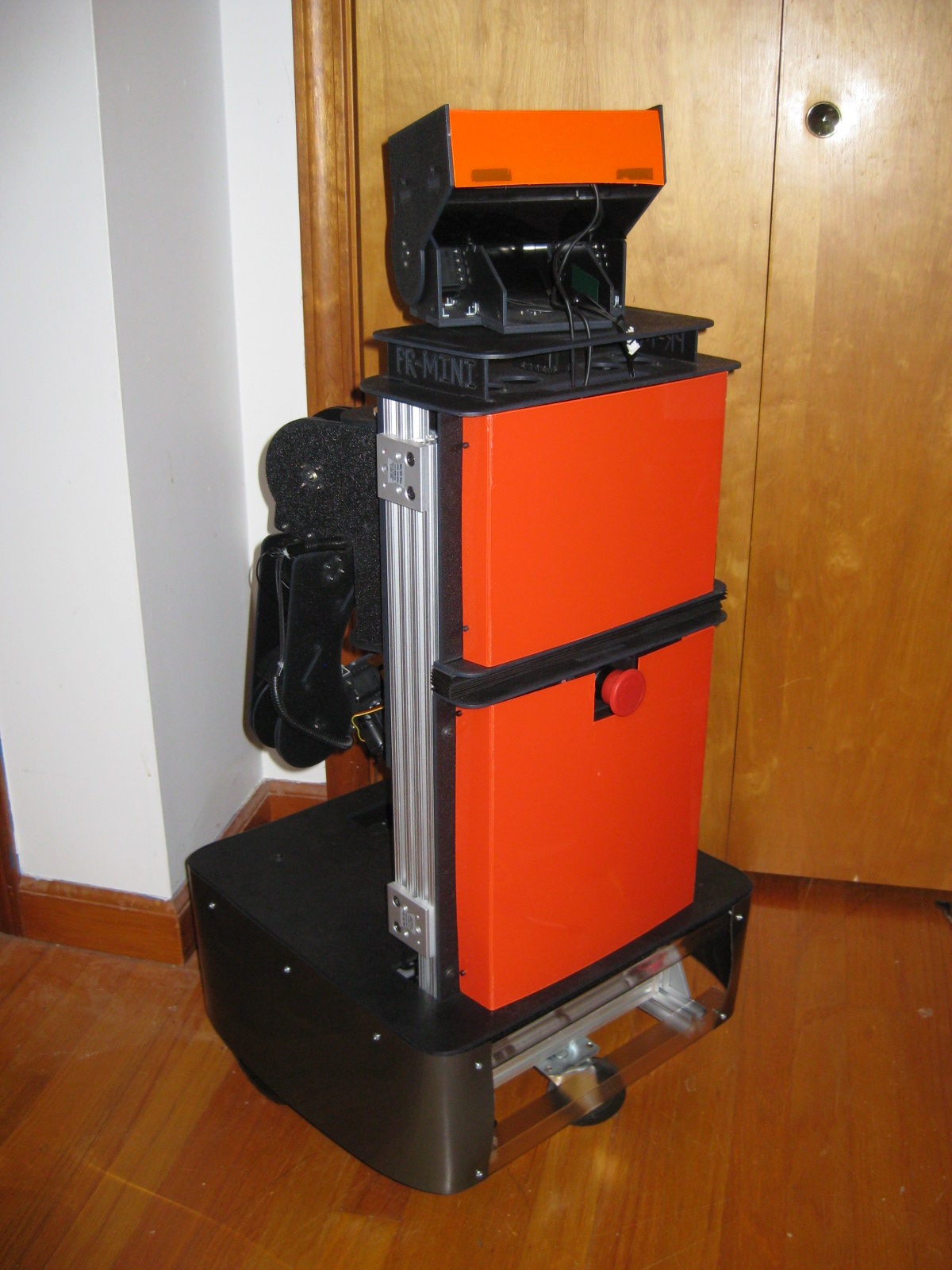 I went as far as moving arms around under ROS, and tuning in the navigation stack a bit. The code developed for this robot later became the arbotix_ros drivers: 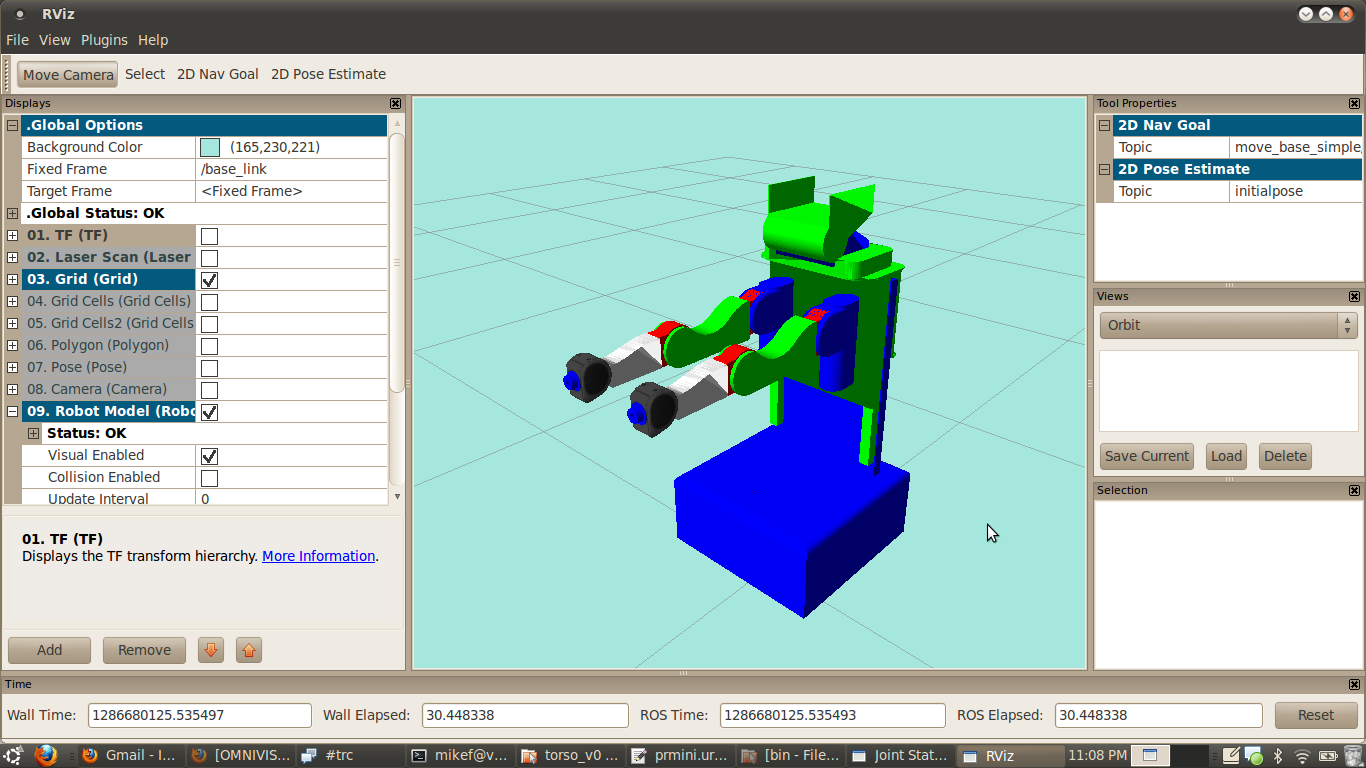 A couple of things did this robot in. First off, it was really heavy (45lbs) and hard to easily transport around (which I was doing a lot of back then). Transport was quite funny as well, because the arms loved to dangle in every possible direction, leading to the "bubble-wrap straight jacket":

Second, the Kinect came out shortly afterwards, making the sensor suite pretty lacking, and looked ludicrous trying to strap a Kinect on this robot. A number of lessons learned are pretty clear in Maxwell, which was built shortly after this robot sacrificed his arms. Oh, and since I couldn't find a reason to slip this picture into the story above, here is a view of the Autodesk Inventor CAD model: 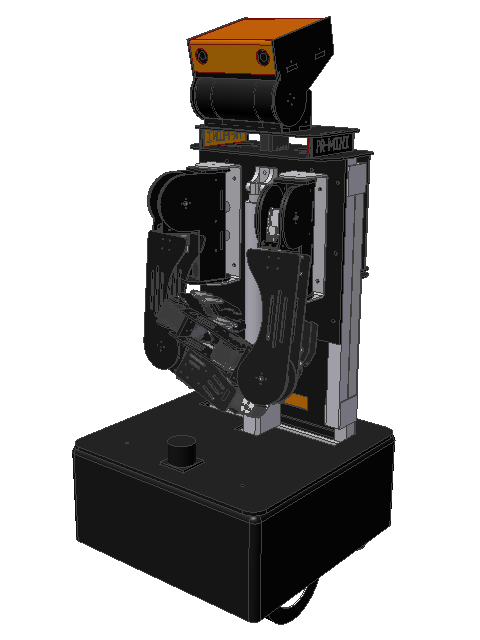