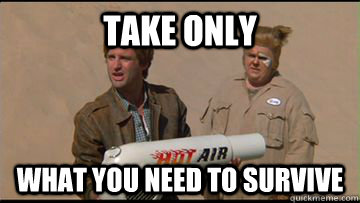 I’ve been using ROS2 quite a bit over the past several months. As I’ve previously mentioned, it would appear there aren’t too many real robots running ROS2 yet. We have a bit of a chicken-and-egg problem where the tools are not yet fully ready for real robots, but until people start using ROS2 on real robots nobody knows the real pain points.

There are many, many things that could be done in ROS2. But there is limited time to implement them all - so we need to focus on those that enable robots and their developers to “survive”.

I often get asked if ROS2 is ready for prime time. My answer for a long time was “no”. I’m going to upgrade it to “maybe, depends on what you’re doing” at this point. This post describes five things that I think would make the answer “hell yes” for most roboticists. I actually hope this post ages poorly and that all these things come to happen in ROS2.

Quality of Service (QoS) is probably the biggest change between ROS1 and ROS2 - it’s also the one that causes the most headaches from what I can tell. The ROS2 Foxy release adds a --verbose option to the ros2 topic info command which is a huge step in the right direction. This lets you quickly diagnose when a publisher and subscriber are using incompatible QoS.

rosbag2 got a huge upgrade in ROS2 Foxy: it automatically determines the proper settings for Quality of Service (QoS) so that it always connects to the publisher you’re trying to record (note: if multiple publishers are publishing to the same topic with different QoS it may not work - but really, who does that?).

Now we need that feature in RVIZ2 and the command line utilities (CLI). These are debugging tools, so they need to be able to “just work” in most scenarios.

Since most of the time you’re using RVIZ2 to connect to sensor data, which is often published with a non-default QoS (the sensor data profile), it’s absolutely bonkers that RVIZ uses the default QoS on everything (which is incompatible with sensor profile). Even something as simple as latched topics won’t work by default.

This is not an easy ask. It will involve significant changes to RVIZ as well as changes to lower level packages like message_filters, but I’m pretty sure this is the single biggest bang-for-your-buck improvement that will make ROS2 work better for robot developers.

Ok, I’m sounding like a broken record (or the squeaky caster on your 8 year old mobile manipulator), but this is really important.

I’m not just talking about the lack of tutorials here. One of the things that made ROS great for new developers in the 2011-2014 era (when it experienced huge growth in the community), was a very polished and up-to-date wiki. If you wanted to find out about a package, you could go to wiki.ros.org/package_name - and the documentation was right there (or if it wasn’t, you had a pretty good idea this package wasn’t ready for prime time). With ROS2, we don’t have a centralized place for documentation yet - and I think that is holding the community growth back.

There is also the issue of “user documentation”. Nearly everything for ROS2 is written assuming an expert programming background (even more so than ROS1 documentation). Reading the source code is not how you’re supposed to learn how to run a ROS driver for a laser scanner.

Building out a community is super important. The best way to get a bug fixed is to find a developer who needs it fixed. I’ve only been using ROS2 on-and-off for a couple months - and in that time I’ve fixed half a dozen bugs across multiple ROS2 packages, and even taken on maintaining the ROS2 port of urg_node and the related packages.

Now we’ll jump into a super technical issue - but the impact is huge - especially for those doing perception (which is, you know, generally a big part of robotics). When creating a publisher in ROS1, you could register a callback which would get called whenever a subscriber connected or disconnected. This feature doesn’t yet exist in ROS2, but I think it is essential for real robotics systems. Here’s why:

Robots can generate lots of sensor data - especially when you add processing pipelines into the mix. Sometimes you might need a high-resolution point cloud with color and depth information. Sometimes you need a low-res colorless point cloud. This is especially true when the robot system does multiple tasks. For instance, imagine a robot that is both mobile and a manipulator - for navigating the environment it wants that high frame rate, low-res point cloud for collision avoidance. When the mobile manipulator gets to the destination it wants to switch to a high-res point cloud to decide what to grab.

Sometimes you literally cannot be publishing all the data streams possible because it would overwhelm the hardware (for instance, saturating the USB bus if you were to pull depth and color and IR from most RGBD sensors at the same time).

In ROS1, you could create “lazy publishers” so that the creators of these intensive data types would only create and publish the data when someone was listening. They would be alerted to someone listening by the connect callback. The lack of lazy publishers throughout various drivers and the image_proc and depth_image_proc packages is a real challenge to building high performance perception systems. When people ask me “is ROS2 ready?”, my first question these days is “how much perception/vision are you doing?”.

To be clear, there are workarounds available in some cases. If you’re creating a publisher yourself, you can:

Note that I said, “if you’re creating a publisher yourself”. There are lots of packages that are widely relied on in ROS1 whose ROS2 ports are crippled or broken due to the lack of subscriber connect callbacks:

Note: in the month that I’ve been writing this post, a number of questions have been answered, so we’re already getting there!

I remember folks joking that ROS Answers was misnamed, because there were no answers there, just questions. It’s actually not true - unless you search for the ROS2 tag.

There are a lot of really good questions there. Like, stuff that’s not anywhere in the documentation and is probably quite relevant to a large number of users. Here’s a few examples:

ROS2 developers, please take note: we’ve got lots of great features in this system, please help your users learn to how to actually use them - maybe they’ll even help contribute back!

Your Robot on ROS2

There’s probably a bunch of other bugs/issues/etc hiding in the weeds. Your robot is probably not exactly the same as mine - and your use cases are going to be different. We need more robots running ROS2 to dig into things. The good news is: you can install ROS1 and ROS2 on the same system and switch back and forth pretty easily.