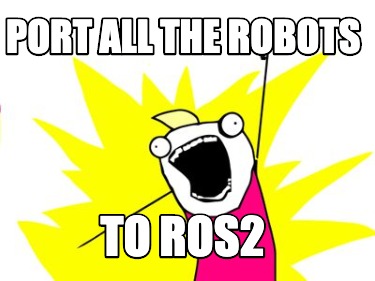 Now that the UBR-1 is running pretty well under ROS2, I have started to also port Maxwell and the Robomagellan robot to ROS2. Both depend on my etherbotix drivers package, so that is the first package to port.

In ROS1, the etherbotix_python package was written in Python and leveraged some code from the arbotix_ros package (mainly for the controllers). I decided while porting things to ROS2 that I would migrate to using C++ and leverage the robot_controllers which I had recently ported to ROS2.

Since this was effectively a new package, I used the ros2 pkg create command to setup the CMakeLists.txt, package.xml and other boiler plate stuff.

I then started to setup the node based off my very old asio_ros example. At some point I should probably setup a test to see how accurate ROS2 timers are, but I knew for sure that this code would work so I stuck with boost::asio.

In ROS1 I had a number of scripts for interacting with the Etherbotix. For some of these, such as read_etherbotix, it was easy to port them to C++. For others, such as my motor_trace script which uses matplotlib, I really wanted to keep the majority of the script in Python. To accomplish this, I wrapped my underlying C++ drivers using Boost Python.

It required a bit of CMake:

I then created a file etherbotix/__init__.py:

This allowed me to import my C++ class Etherbotix in my scripts with:

Most of the ROS2 code I’ve ported has thus far been various nodes, rather than a library that will be used by other packages (the one exception being robot_controllers_interface). I hadn’t previously paid super close attention to how things are exported. There are a few declarations that get placed at the end of your CMakeLists.txt:

This code snippet is from my ros2_cookbook project on GitHub. You can also find the full commit for enabling downstream packages to build upon the library exported by the Etherbotix library.

The controllers for Maxwell are now all setup. You can see the configuration here.

Throughout the driver code we have to construct buffers of various bytes to send to the hardware - often involving arrays of bytes of varying length. This is generally really clean in Python, but in C++ usually results in something like this:

I decided to come with a cleaner approach, since there are quite a few instances of this throughout the code base. I ended up creating a get_write_packet function like I had in the Python code, with this signature:

And then using an initializer list to create the variable-size buffers of bytes to send:

Yes, this probably is not the fastest code (since it passes the vector of bytes by-value), but I like how it cleans up the code and none of these vectors are all that large. You can see the full commit on GitHub

The final part of my etherbotix port was to add diagnostics back into the node. diagnostic_msgs are an underused feature in ROS. They offer a common way to send information about the status of things, mostly hardware. Drivers like urg_node, the joy node, and even higher level filters like robot_localization publish diagnostics.

While diagnostics can be passed through analyzers to output a diagnostics_agg topic, I often just use the rqt_runtime_monitor which access the raw diagnostics topic. I found it was missing in ROS2 - but there is a port, which hasn’t been merged yet. You can find that port here.

I’ve made some major progress on running navigation2 on the UBR-1 and that will be the subject of a post next week. After that I’ll be continuing on bringup of the robomagellan robot, including integrating robot_localization in ROS2.